The Norwegian flag. It is clear of Eiric Magnusson’s golden lion, ax and crown.

Actually, there is such a thing as alternative reality and in fact we live in it.

Pumis rule our life and clocks have been replaced by animal ovulation detectors to measure time.  So no surprise,  I am on the road again. At this time, traveling with Anka to Lora, Norway. Our host is Lisbeth Åvangen, the owner of Ares, a beautiful black male Pumi. I also have a chance to meet with my friends, Jacky Neeras and Berit Thyra Meland Pedersen, who are the owners of two of my Catskill Pumis, Cherry and Erös. We had a short, however, busy  week in Lora. 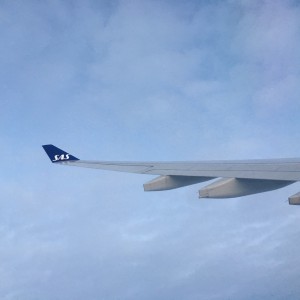 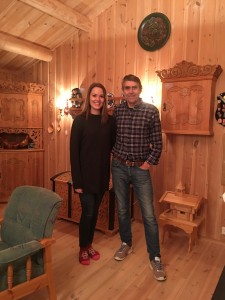 My wonderful hosts, Lisbeth Åvangen and her dad, Oddbjørn,  in Lora, Norway. Lisbeth is the owner of Ares, the black Pumi. The  house and cabinet woodwork is Oddbjørn’s master craft work. 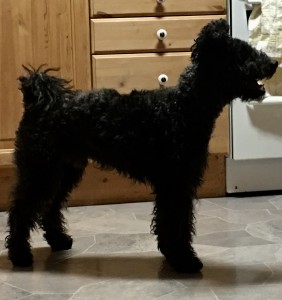 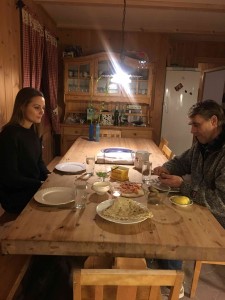 Traditional dinner, including rakfisk, a fermented aged raw fish with Lisbeth and Oddbjørn.

I always love to read about the places where I go to, before departing to my destinations. So I’ve looked into the history of Norway where we are traveling to at this time and I hope that I can entertain you with some information that you’ve not been familiar with. 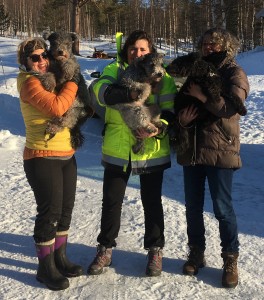 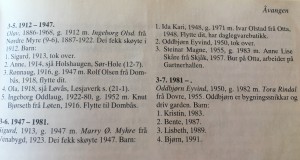 The genealogy of Lisbeth’s family. Scandinavian countries has a very precise records of their family trees.

While settlements along the Norwegian coastlines have been present as early as 10000BC,  the  nation’s history as a lose tribal system  reaching back to the more recent and truly chaotic period, of the Völkerwanderung, or migration period of Europe. It was around the second part of the first millennium, when Viking tribes along many other migrants pressing from the east invaded and either nihilated or pushed out earlier migrants further west. The stories of seafaring fearless Vikings are widely known, however, some historians from the prospective of nation building characterize this period as nothing more than “plundering, fish and potatoes.”  Vikings had sailed, pillaged looted and traded as far as Iceland, and  North America. Finally, a couple of hundred years later, Christianity, under King Olav transformed the Vikings into a nation of the Kingdom of Norway in 995. 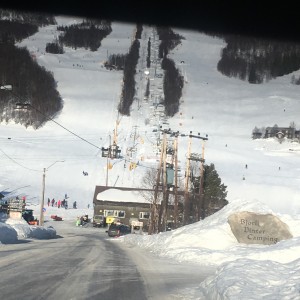 Overtime, the country had periodically fallen under Danish and Swedish rules or entered into unions, until its final independence in 1905. Interestingly, the 1905 referendum concluded that Norwegians had chosen monarchy over a republic.  Since no Norwegians could trace their ancestry back to any medieval royalty, the government invited Carl of Denmark to the Norwegian throne. (in Europe, traditionally without “blue blood” no citizen could claim the right to a monarchy). Norway is a constitutional monarchy today.

Lesja Church, the place of the first election in Norway 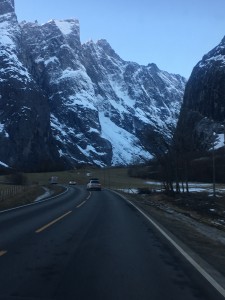 Rattus Norvegicus villain or victim of the Black Death?

The country has had its fair share of epic catastrophes. In 1349, the black death has killed over 50% of the country’s population while during the 1695-96 famine about 10% of Norwegians perished. The experience of centuries of wars, occupations, upheavals and religious wars pushed Norway to chose neutrality during the two world wars. Unfortunately, this noble idea  did not work in practice. During the Great War, the British pressured the Norwegian government to use its merchant marine fleet to support the British war effort with great sacrifice and heavy losses.

Norway’s link to the Great War, however, has a far more significant story.

The war ended in the fall of 1918 and it was immediately followed by the worldwide outbreak of the Spanish flu that killed 20-40 million people around the world. This deadly flu virus has never been isolated and because of the reoccurring deadly influenza outbreaks in the last few hundred years, scientist welcomed a rare discovery in the small Norwegian mining town of Longyearbyen above the arctic circle. This tiny town’s church grave yard has provided final resting place to seven Norwegian miners who died of the Spanish flu between October 2 and October 7, 1918. These seven bodies have a great  significance in epidemiological history because given the location of Longyearbyen, just above the arctic circle, the bodies were buried under the permafrost and therefore, they could potentially preserve the lethal virus of the devastating Spanish flu. Malcolm Gladwell’s 1997 article, “The Dead Zone” is a fascinating read about the scientific and moral meaning of this medical expedition. 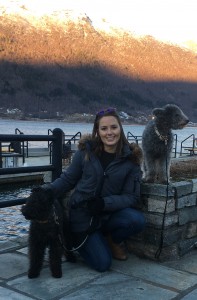 Ares, Lisbeth and Anka posing for a picture 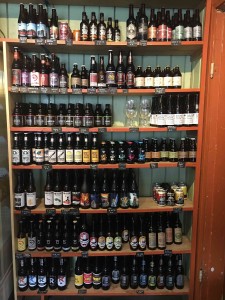 Lora might be a small place, however, has a pretty decent beer selection

Twenty two years after the Great War, Neutrality has failed again In 1940 when Germany occupied Norway for its  unique ice free harbors as a strategic location for its Navy fleet and to exploit Norway’s iron ore mines for the war effort.

The post-war years have brought state sponsored and strictly regulated industrialization in Norway.  Price control and rationing of housing or automobile purchase were still in practice as late as 1960. 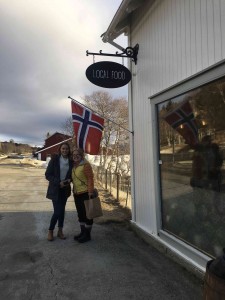 No hope is lost. There is always a place to shop, even close to the arctic circle. Lisbeth and I in front of the local food store in Lora

In 1968, an unlikely figure from Iraq, Farouk Al-Kasim has confirmed that Norway has enormous off shore oil reserves. When Phillips Petroleum Company from Oklahoma has started drilling following Al-Kasim’s instruction, they hit the jack pot and oil has changed the projectile of the country and the life of its citizens forever.  However, Al-Kasim’s more significant contribution to Norway’s economy was the proposal of a government run Petroleum Directorate that aimed to avoid the so called “resource curse” that keeps many oil rich nations’ citizens in poverty due to  government corruption, the abuse of local environmental laws by multinational petroleum corporations and also the “killing off” of most domestic industries by the over extension and domination of oil related businesses in the host country.   With the help of economists, Norway established a “Sovereign Wealth Fund.” By using only the interest of its oil revenues, the fund has a close to a One Trillion(!) US Dollar from various investments (that is close to $200,000 per Norwegian citizen – not per household….!) – today. This wealth enables the country to maintain a high quality democratic welfare system, during “rainy days.”  Norway in general  provides excellent education, healthcare, safe and generous social security system among many other things, that Americans mistakenly call “socialism.” Government investments are consciously selective. Retirement funds do not support “dirty” or unethical businesses and industries (i.e. coal mines, tobacco, guns, etc.) of the stock market. For the records, Norway is not alone with its Wealth Fund. Saudi Arabia, Kuwait and even China have their citizens’ current and future welfare in mind. (Hey US politicians is  anyone planning to travel to Norway anytime soon…?) 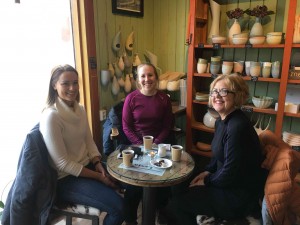 warming up in the local cafe house with Ingeborg Noren and Lisbeth. Sitting in front of all these ceramics, I had a sudden flashback when I was working ceramics including porcelain many years ago 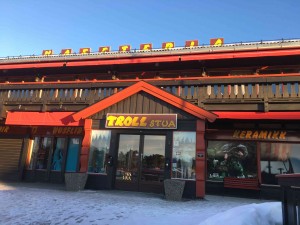 Trolls, are mythical creatures that live in the forests.  Norwegians are serious about their Trolls. Trolls also have their own stores. Honestly, they look more fun than Batman and probably have a much more colorful storyline.

Norway is an affluent (No. 4 GDP in the world) and…a  “green country” with extensive network of hydroelectric power plants strong wind energy development, and a diverse and flexible economy supported by a highly educated work force that gets an inexpensive, however, high quality university education.

An interesting fact; Norway has the most Tesla automobiles per capita in the world. One out of ten cars is a Tesla in Norway. Tesla runs for about $100.000 in Norway. However, government incentives makes expensive electric cars affordable. (No sales tax, income tax reduction, free parking, no registration fee, free toll route use, free use of bus lanes in rush hours etc.) 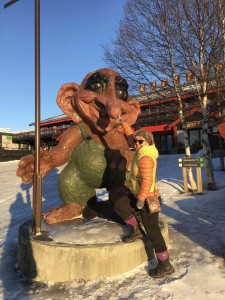 Will trolls make Norway great again? perhaps not, however, they will put a smile on everyone’s face.

Surprisingly, this perfectly oiled economic gearbox of Norway, (pun intended…) has almost  gotten to a screeching halt by the “smør-panik” or “Butter Panic.” In 2011, the unusually wet summer  destroyed many dairy pastures and dairy production, especially butter production has dramatically declined. Major dairy producers ignored the growing domestic butter shortage and kept up their export volume. Since dairy import has been limited by very high protective tariffs in order to shelter local daily farmers, a  perfect storm ensued and created a severe butter shortage, especially around Christmas time. (Norwegians have a low carb high fat diet and consume lots of butter especially during the holidays.)

Prices skyrocketed.   8oz butter suddenly did cost $50 (!). To further complicate things, shoppers refused to buy and use margarin as a substitute. People were arrested for smuggling butter from neighboring countries in to Norway and butter was also auctioned off on the internet.  The government was forced to reduce import butter tariffs over 80% to temporarily remedy the situation.

While the overall economic picture of Norway is appealing, skeptics find it hypocritical and simply call the Norwegian miracle carbon laundering.  The country is frequently criticized for  building a picture perfect eco friendly green country, from its main source of wealth, oil and gas and accused of indirect environmental pollution and contributing to global warming by selling its fossil fuel.

A furry troll for you to hug on a cold day.

The past few years, declining oil prices concerns the fund’s director, Mr. Slyngstad.  With lower revenues, the fund’s growth has slowed. Also, missed investments in emerging markets has caused significant share losses in developing economies.  The relatively large refugee influx has also jeopardized the highly prized relative homogeneity of the country’s population within the last decade. The fear is that a more diverse society with naturally more diverse opinions might negatively impact the investment trends established for the fund.

Suddenly a new unavoidable question emerges, can the descendants of the  heroic Vikings keep sailing, trading and exporting Norwegian values without returning to “looting” and ethnocentrism in this new era of Völkerwanderung? http://mackenzieinstitute.com/worth-repeating-volkerwanderung-the-next-40-year-crisis. (The Canadian Big MacK… might not be my favorite conservative right-wing think tank but as the “Comment 20 years on” says, they are half-right half-wrong.)

My advice is that get a Pumi and stop worrying.