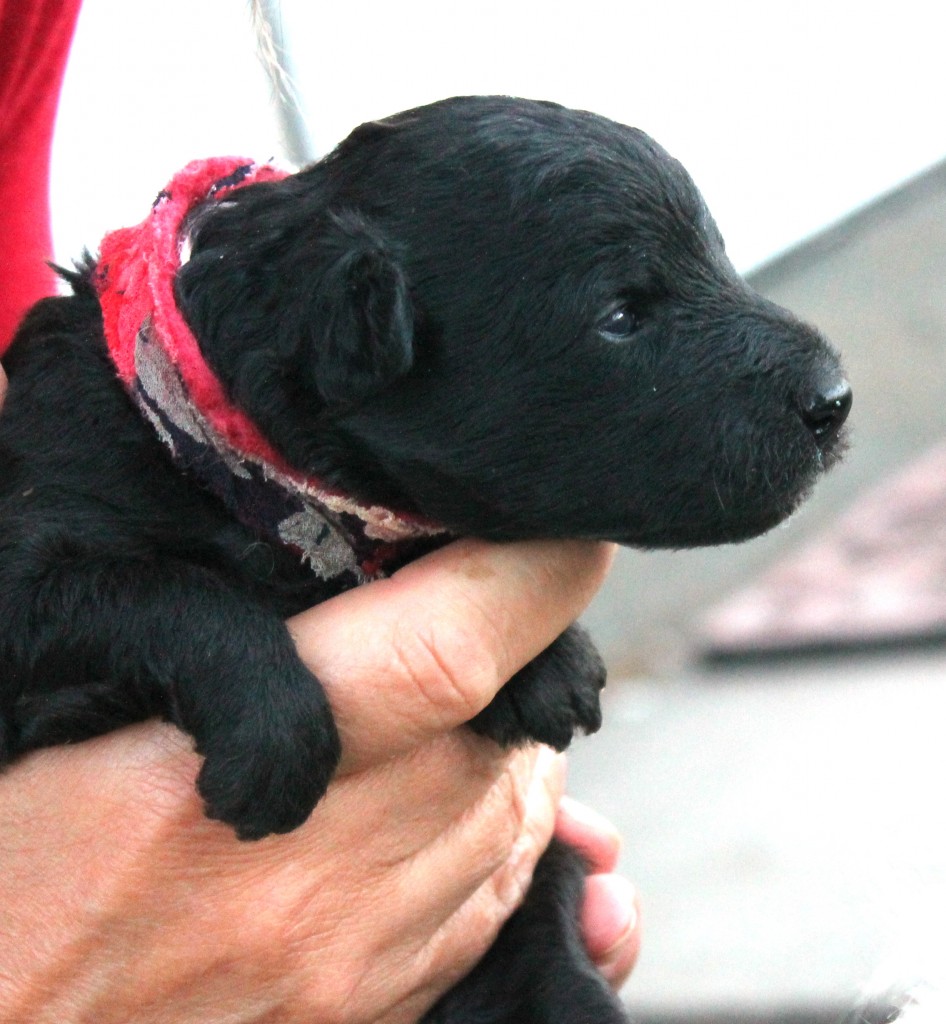 I do not know how exhausting must be to raise new born human babies, but trust me it is pretty crazy here with these seven puppies.

Our C-litter will be two weeks old tomorrow and their care has been intensifying as they grow every day and approach the end of their neo-natal period (1-14 days). Changing clean sheets, getting up twice in the middle of the night to make it sure that Agyag feeds them.   The daily Dr. Bataglia exercise is in its eleventh day tomorrow.  Daily body weight measurements, checking room temperature and turning heat lamp on and off as Agyag moves in and out of the whelping box because the new borns still cannot regulate their body temperature. 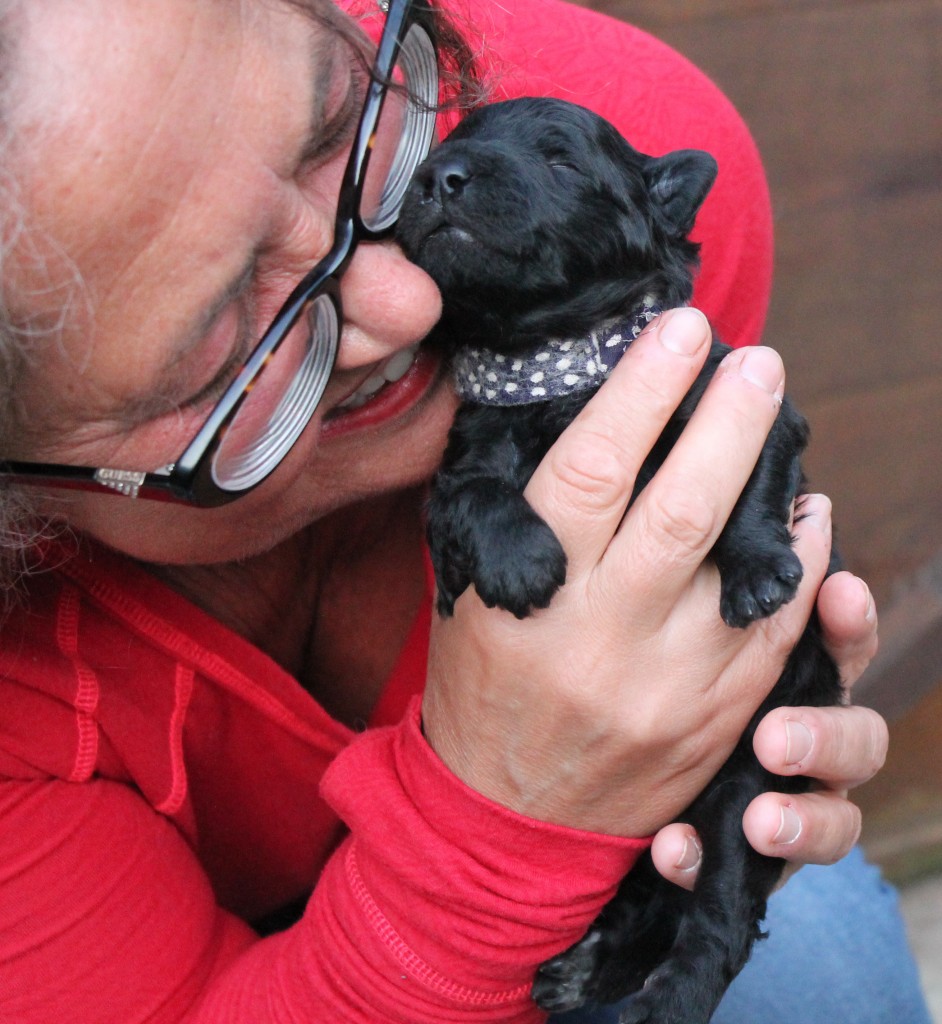 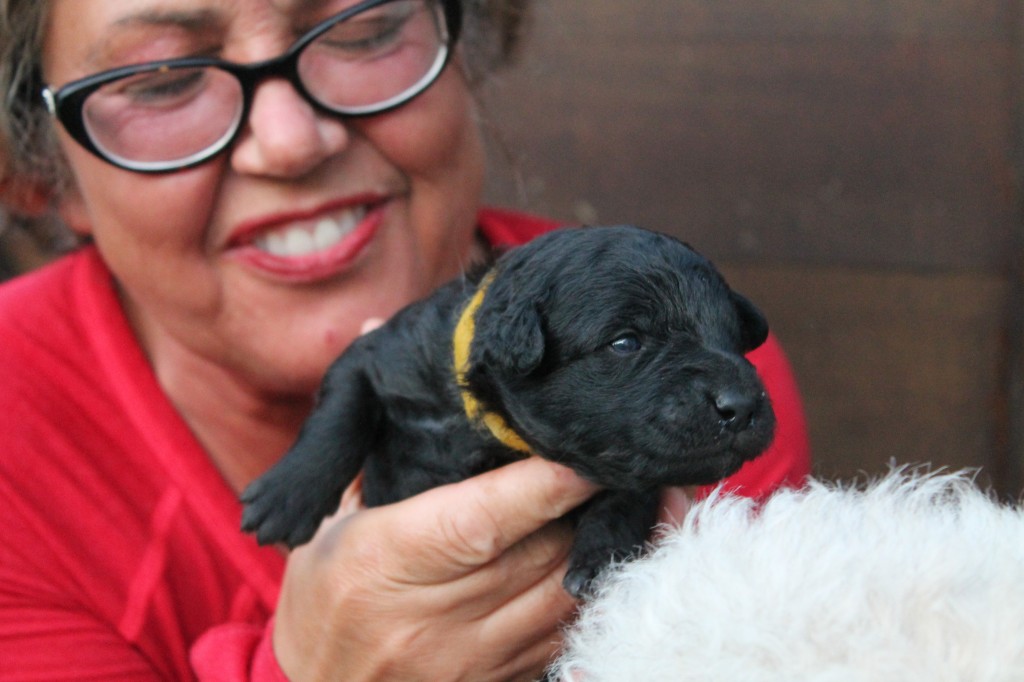 Yellow Boy is ready for action

The major milestones to report about are that they have started opening their eyes and as of today, every single pup has become member of the “Twenty-Ounce Club.” Tuesday they  were still crawling and this morning some of them marched to Agyag to nurse as one walks into a Starbucks for a cup of coffee. In no time they will be outside on the fresh green grass to enjoy the great (limited) outdoor.  It is pretty fascinating to see the effect of their opening eyes. Each dog has become much more active and inquisitive of their surroundings. They start discovering our wonderful world. 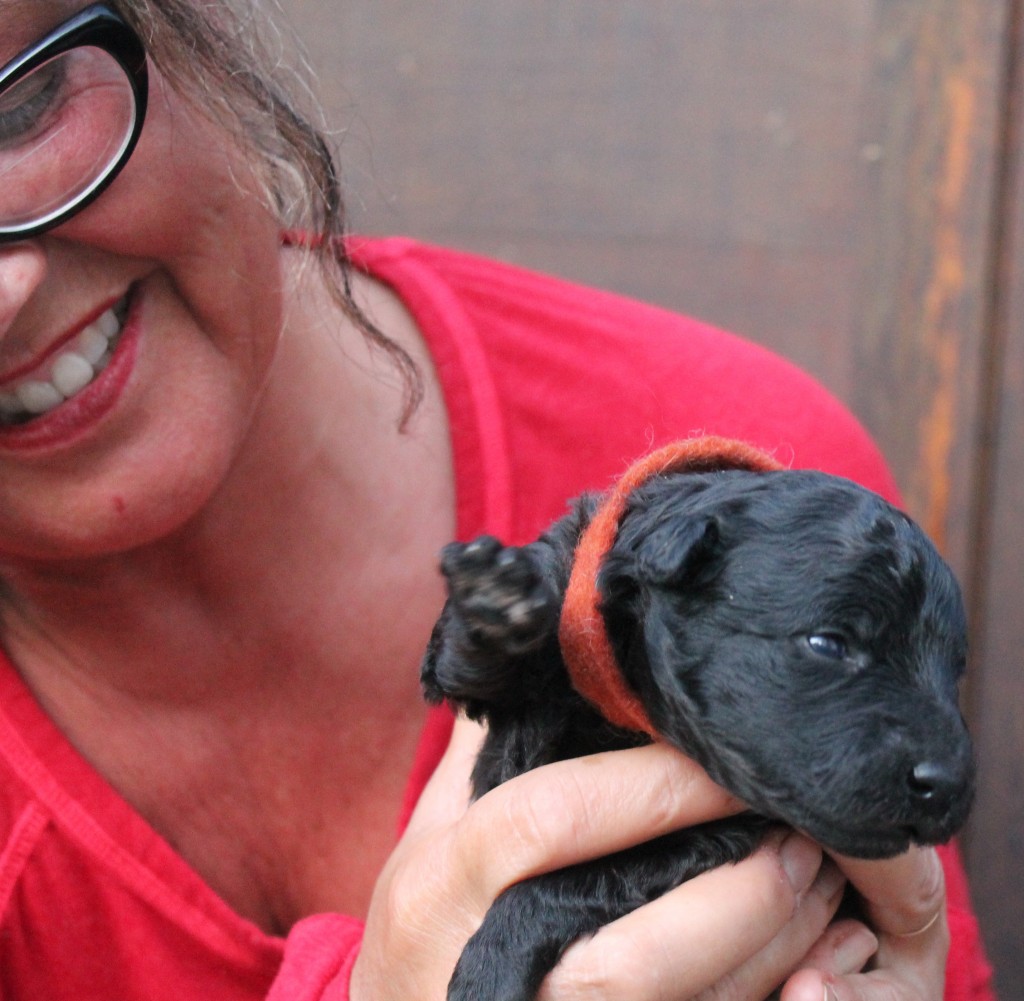 Miss Red is saluting to the newly discovered world

In the same time, Mama Agyag is doing well.  She has been eating three times a day and she is pretty demanding when her bowl gets empty.  Her energy level is up and has been out to   herd twice a day. 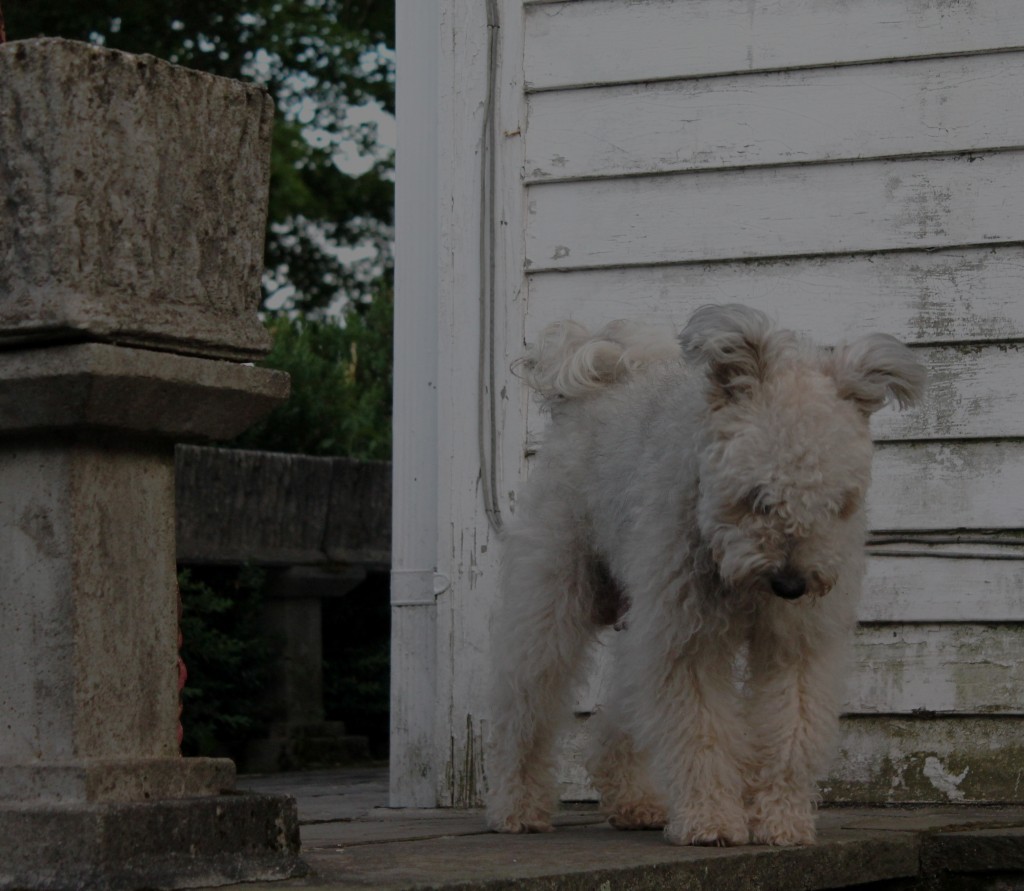 “Blue Angel” if Marlene Dietrich was a Pumi

I’ll be leaving for a week on Monday, therefore,  I will miss the pups’ third week.  While I am gone Laszlo, Marika and Martha will take care of them. 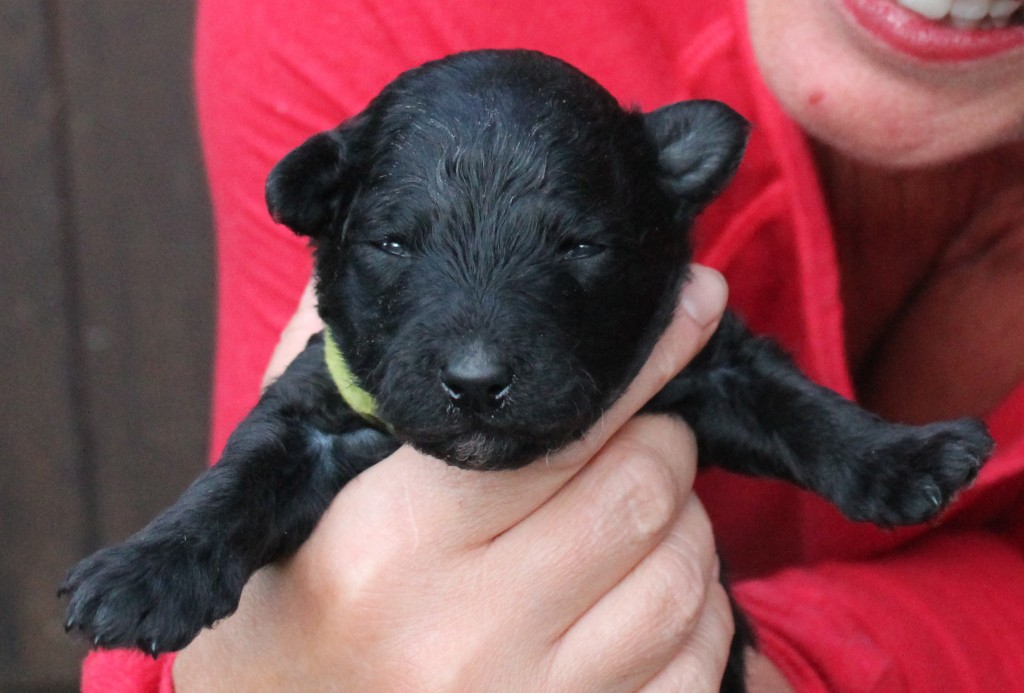 Green Devil Boy…the question is,  who will blink first… 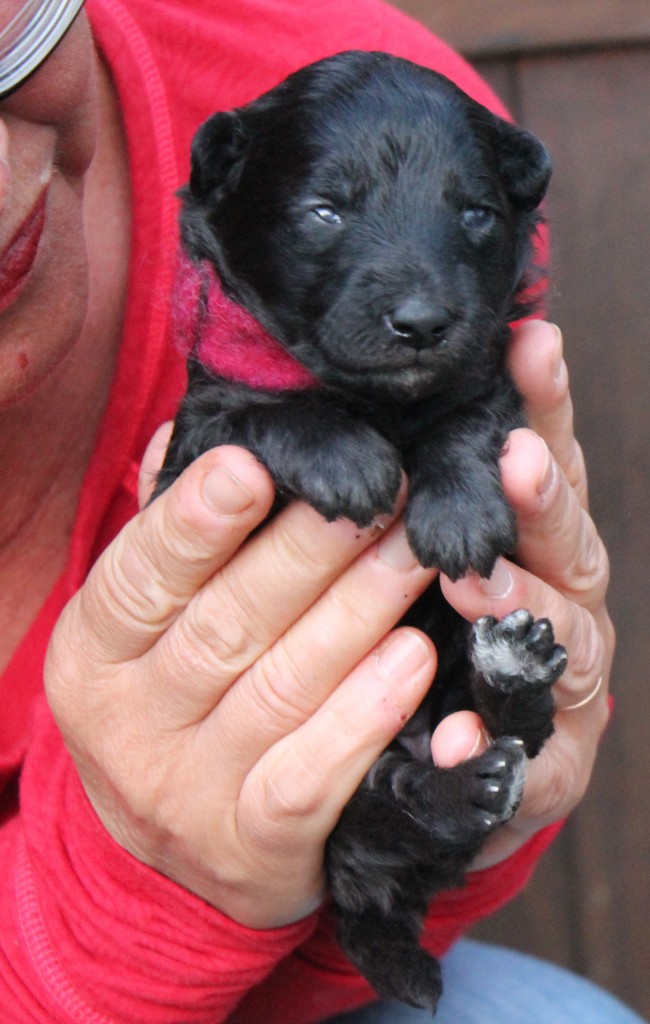 Girl of the Purple Order

After all, it takes a whole village to raise seven Pumi pups… 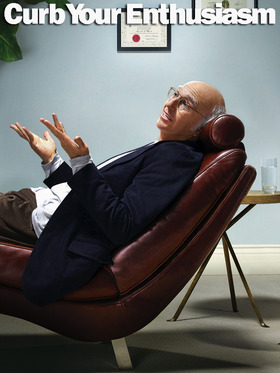 Earlier this month I was listening to a “Fresh Air” episode on NPR.  They were interviewing Larry David, the co-creator of “Seinfeld” and “Curb Your Enthusiasm” about David’s new hit on Broadway, “Fish in the Dark.” During the interview they played a funny clip from “Curb Your Enthusiasm” where the obnoxious main character of the show, Larry David (played by Larry David) meets a friend, Mardy Funkhauser, a guy about 60 some years old. David complains to Funkhauser that he did not return his condolence telephone message (Funkhauser’s mother just died). In his own defense, Funkhauser responds that David should be more sensitive because he, (Funkhauser) just became an orphant. (he lost his father earlier that year and now his mother too.) David in his rude style makes fun of him and says that it is too late to be an be an orphan at age sixty. “Little orphan Funkhauser.” I had such a good laugh…

Yesterday, I had the occasion to think about this clip. Take it apart and look behind it. In a way I  am orphan too, (lost both of my parents) just like Funkhauser, however, I am and has been an orphan in other ways too since my birth.  Born into a German ethnic family (Eberwein x Hundenmeier) growing up as an official ethnic Hungarian (Repasi) minority in Transylvania, Romania. (Romanians had the perfect term for Transylvanian Hungarians, although derogatory in nature; “bozgor,” which means  a person without a homeland and ethnic identity.) Then when I moved from Romania to Hungary, ironically I was simply called a Romanian.  In Austria I was under the  umbrella term “Auslander,” or foreigner and in the U.S. I have become a naturalized U.S. citizen, and so a Hungarian American (my choice).  Always and everywhere “in,” however, always on the periphery.  My social position helps me to observe, listen, notice details, interpret and process from an angle that is impossible to do from the center. Like I, people with similar backgrounds often hear meaningful sentences in certain remarks that for others in the center are only “harmless” white noise. Usually, I do not think about these things, it has always been “that” part of my life.

I tell you this, because I got nostalgic yesterday. On our way home with Marja-Leena in the afternoon, we ran into a small group of well dressed gypsies or Romani.  Their presence captured me… I asked their permission to photograph them. Unfortunately, I only had my phone to take a picture so I missed many details.

The gypsy or Romani diasporas are probably the perfect definition of “orphans.”  Even though, many of them living in urban environments, symbolically they have always remained nomadic, always moving, or ready to move.  Always on the periphery, rarely accepted, seldom assimilated.  They have always been demonized and persecuted in every corner of the world throughout their existence.  However, somehow they have never perished, always survived and thrived with an incredible resilience. http://www.youtube.com/watch?v=hSjaOM7Bewk  click link

I was curious, so after I went to bed, I looked up the Finnish Romani or Finnish Kale (Kaale in Suomi.) The Roma first arrived from England and Scotland to Sweden in the fifteen hundreds. THey were mostly craftsmen and journeymen. While the Protestant Church proactively pressured the erosion of the Romani’s relatively stable position on the social hierarchy, Swedish authorities deported the Kale to the Eastern part of the kingdom (which is Finland today.)  In the first part of the 17th century they were declared outlaws and could be hanged without trial.  For a long time, children frequently have been taken away from their families in an effort to assimilate the group.  After  four hundred years of severe discrimination, in 1917, the Roma has gotten full citizenship in Finland and human rights conditions have gradually improved. The 1995 amendment to the Finnish Constitution granted the Roma to preserve its language, the Kale, as a “non territorial minority language.” The Roma in Finland, just like everywhere else, facing high unemployment frequently due to relatively low education.  They experience significant exclusion from mainstream society and  face specifically severe discrimination in the private housing market.   Sources,  http://www.minorityrights.org/1537/finland/roma.html     http://www.prezi.com/f639kuzyb7jj/romanifinnish-kale/

While reading this minority rights report, I came up with the idea for an interactive comprehensive geography, history, ethnography etc. game for children to learn about history and the world. The name of the game could be “Cut and Paste” For instance, cut Finland from and paste Australia in to an official human or civil rights document, than cut the Finnish Kale out and paste Aboriginal into the same document. Than cut Australia and paste U.S. than cut Aboriginal and paste Chinese and so on… after every cut and past a map would come up with the respective countries and photos of their oppressed ethnic groups, their artifacts and their brief miserable history… Or we can just let the kids watch “Wheel of Fortune…”