The four-day long FeHoVa International Winter Show has begun at HUNGEXPO, the Budapest International Exposition site yesterday. The show is becoming a rather peculiar event.

There have been 25 Pumis from 13 kennels and 4 countries yesterday.  The judge was Mrs. Szabo, Katalin Ivanyi.  Kaffogo Agyag placed second in her class with Excellent 2 and Res. CACIB. Well done Agyag!! 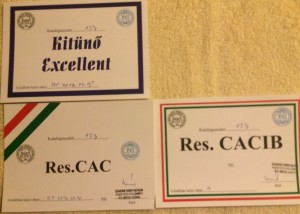 Before I start to tell today’s bizarre experience in the ring with judge Mr. Istvan Laszlo, Let me congratulate to Nyirsegfia Tuske/Pityke/ BOB and Heczendorfer Jozsef, his owner/handler.

To make the story short, I’ve noticed that Mr. Istvan, the judge, has made some not exactly complimentary statements about a fawn (fako) male Pumi  to the dog’s owner in the ring earlier. He also asked the handler/owner of the same dog that who was the breeder of the dog.  When later we walked into the ring, he also asked me whether Agyag’s breeder was the same person as the fawn Pumi dog’s earlier. I told him that no, my bitch comes from a different kennel. 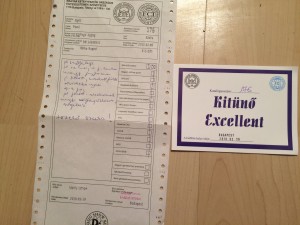 Excellent 1 No CACIB… reason, Bitch in heat! I am pleased with the description but to deny a dog  of CACIB and to advance further because she is in heat, that is kind of…

Judge Istvan overall complimented Agyag and gave her first place in the Class,  “Excellent one, ” however, withheld the CACIB from Agyag by saying, “I cannot give her the CACIB because she is in heat….” (it is on her official written record)  Mr. Istvan Laszlo also did not allow Agyag to advance and enter the ring for the BOB title, even though, she won her class.

I admit, I was unpleasantly surprised. I looked at him, and nonchalantly told him that, how funny this was because three years ago this was not an issue when he, Mr. Istvan Laszlo selected Agyag to be the first Junior Raisits Cup winner in a much larger competition and Agyag, was in heat just like today. He stared at me with wide eyes and open mouth, (I think his tonsils have been removed..)and after a short pause he composed himself again and said, “yes, but she was close to finishing it back than…” 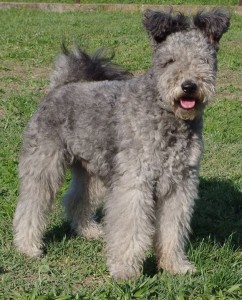 Since we did not have to show again, thanks to the judge, it gave me plenty of time to check the FCI rule book. I copied out the relevant sections for our situation. below is the direct copy of those sections.

…Bitches on heat are allowed to participate subject to the show regulations of the organisers.

The only dogs which can be taken into consideration for the CACIB are those which have been awarded “EXCELLENT 1st”. A CACIB can only be awarded if the dog in question has been assessed as being of superior quality. The CACIB is not automatically and compulsorily linked to the “EXCELLENT 1st”.

So yes, indeed, he has the right to withhold the CACIB, even though, the dog got Excellent 1 and won her class.  The rule book does not give examples of reasons why the judge might withheld the International Certificate.  The unfortunate part is that he also withheld the Res. CACIB from Annika Linden’s dog, Akkinaz Rams who got Excellent 2 and second place.  He won our class and also BOS yesterday.

To be clear, I am not questioning the fact that Mr. Istvan withheld the CACIB because he has the right to do that.  What I do not understand  is, his reasoning, that “the dog was in heat.” He did not say  and wrote that she was not a “superior quality” for the following reasons…(and listing the reasons.) He said that the bitch was in heat and that’s why she cannot get CACIB and go for the BOB.  The rule book clearly says that “…Bitches on heat are allowed to participate subject to the show regulations of the organizers “ based on the information at the time when I checked, there was no stipulations by the organizers that while bitches in heat can enter the conformation show, they cannot earn CACIB and advance for the BOB title (because they are in heat.) I am not sure that when a bitch is in heat what that has to do with her conformation. (I think it is safe to say  Mr.  Istvan Laszlo  would not vote for Hillary Clinton for the same reason… but that one is for another blog…)

This story might finally makes me one of  the “official” whiners and complainers of the Pumi breed, (now internationally too,) but you know what, someone has to stand up and ask the uncomfortable questions for the integrity of the “game” while the rest  of the group hide quietly in the bushes.  By the way, those in the bushes, watch out  for dog poops.