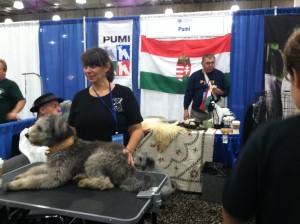 I think the Pumi has more than made it in New York City over the weekend; they ruled… 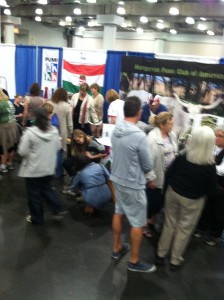 Wow…! this has been one hell of a Pumi week Volks (folks)!  The  Pumis has pretty much over shadowed all national  news in the U.S.  “Obama Care…” never mind, Pumi pup and mom on “Fox and Friends,” “Possible Government Shot Down…”  please! everyone, be serious and rather worry about the crowd at the Pumi boot as reported on CBS News that  wether enough visitors had a chance to meet and greet the Pumis at the Jacob Javits Center in Manhattan, NY!

Great success, nice exposure and superb coordination by Dina Bochnik-Cooper! There is only one thing, can we have mayo next year with the sandwitches…?

Also, thank you for the dedication and commitment for all the Pumi owners who have traveled long hours, as Nancy and Meir,  two days to show up to spread the Gospel ( I guess Mary and Joseph had to have a herding dog, probably a Pumi to keep those sheep around the Baby Jesus…) 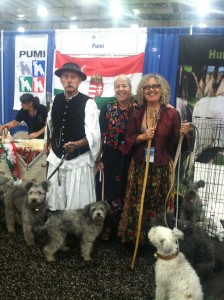 Full Hungarian display at the MTB in New York City (Dina in the background, Meir, Nancy and Ildiko)

Would have been nice to have electricity and Wi-Fi to be paid for by the Club to awe and shock the crowd (after all we were in NYC The Greatest City in the World”) with some great agility, herding and other interesting Pumi videos.  Perhaps next year… 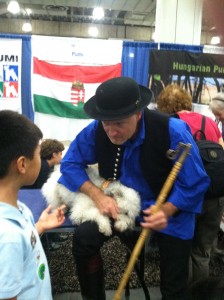 After the official business, some great personal Catskill Pumi Kennel News.  Two of our little guys have flown away to their new homes.  One of them, Kuli to Canada and Asz, joined the Confederate Pumis in Charleston, SC.  They have been adjusting fantastic and we were promised to get periodic updates of their lives with their new families.

Our fifth pup has also been spoken for.  Apacatancos Anka, one of the two females will be moving to New Jersey in November.

We have decided to keep Ara, the second girl, whom we hope to become the next Miss Pumi Universe :-)) It appears, that we’ve had a lucky start with a successful litter.

So Volks (folks) this is it for tonight, thank you for your attention.