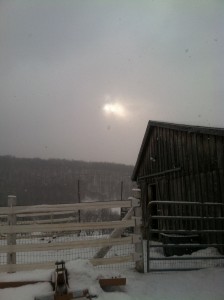 What a rotten time to be a pregnant Pumi in upstate NY.  The term, “spring litter” is becoming an oxymoron. Today is March 23 and the temperature is in the 20-s, we’ve been getting occasional snow showers and uncomfortably sharp high winds.  Most of the ground is  still covered by snow and there is ice everywhere…

By the way, it is official now. Due to climate change, the Easter Holiday has been eliminated and the Easter Bunny has been laid off .  Because of the extended winter,  there will be a second Christmas replacing the Easter holiday.  Crazy as it sounds, we will see Klaus von Santa returning with his usual gig in April again. 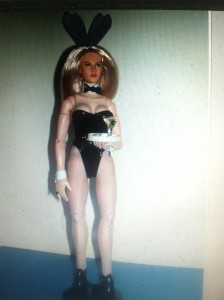 Other Rabbits related jobs, like Play Bunny coctail waitress, are also in danger to be eliminated…

Rumor has it that these changes will also affect other Rabbits related businesses.  So gentlemen, don’t get surprised, when you walk into a Playboy bar next time and instead of your usual Play Bunny coctail waitress, you will get served by one of Klaus von Santa’s apprentices wearing a pair of detachable bunny ears. 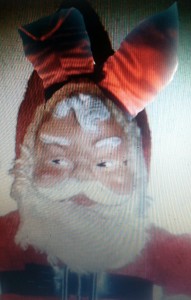 is it really about climate change or simply a hostile corporate take over in the Holiday Industry initiated by Claus von Santa of Weihnachten AG?

But until we find out  the truth, please remember that Fruska has three more quite heavy days to go. 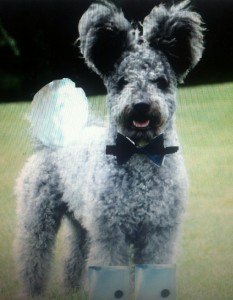 Fruska is in support of saving all Rabbits related jobs and events.