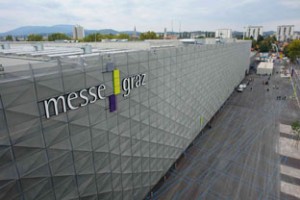 The Messe Center in Graz, the dog show site. I live only a few blocks away.

Currently, I am in Graz at the International Dog Show. For FCI Group 1, it is only a one day show on Sunday.

Graz’s population is about 300,000 people. It is the capital of Styria and is located in the South eastern corner of Austria near the Slovenian and Hungarian border. Graz  seems to be one of those ideal multi cultural picture perfect central European cities from the playbook of the Habsburg dynasty of the legendary Austro-Hungarian Monarchy. The city is a true  custodian of the often idealized gilded past through its architecture, institutions and traditions. The baroque buildings along the quiet narrow cobble stone paved streets, the richly decorated formal palaces and monumental government buildings  on the open town square, or the ghostly Gostling Castle above the city are great reminders of greatness, wealth, culture and the  imperial absolutism of the past. 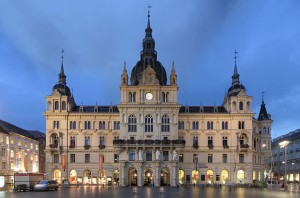 The Rathaus or town hall in Graz. I am surprised that Donald Tump has not proposed yet to rename the U.S. Capitol “The Rat house”

When traveling to foreign places, I am always interested in the “famous native sons and daughters” of the countries and cities I visit. Graz also has its own interesting group of people  to offer.

Graz was the home of Archduke Franz Ferdinand, the nephew of the Austro-Hungarian Emperor, Franz-Joseph.  The aging ruler who preferred feudal tranquility to the reform ideas of the duke,  had a rather unsavory relationship with Franz Ferdinand. The Archduke was also looked upon as one of the dynasty’s black sheep because he married  Countess Sophie Chotek of Bohemia who was just below the “princess level.” Among the many repercussions were Sophie’s exclusion from major state events and the  denial to be buried in the Habsburg Imperial Crypt in Vienna.  The couple’s children were also not eligible for the Monarchy’s throne.  The Archduke’s  assassination in Sarajevo, the capital of Bosnia and Herzegovina, caused the beginning of the Great War in 1914. 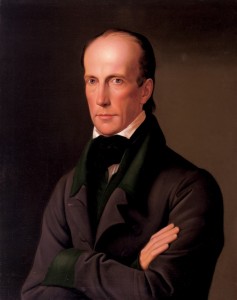 Arch Duke Johann, the Styrian Prince, one of the favorite sons of Graz and Austria, was a military man and the “nerd” of the Habsburg dynasty. He was the founder of the Joanneum one of the early universities in Graz, The Graz Library, Mutual Fire Insurance Co., the Austrian Southern Railway among many other institutions that contributed to the economic and scientific progress of Austria.  He married beneath of his rank, to the postmaster’s daughter, Maria Anna Pilz. The union automatically annulled his accession to the Austrian throne.

An interesting fact about Franz Ferdinand is that he was  a trigger happy hunter, who killed close to 300,000 wild animals during his short life, from small birds to elephants according to Richard N. Lebow,  who wrote  the book, “Archduke Franz Ferdinand Lives! A World Without World War I,” in the “what if genre,” proposing and alternative history for the world. Imagine, how our lives would be different today without the first world war… The assassination of Duke Franz Ferdinand in Sarajevo was indeed one of the greatest catalyst of extraordinary changes in the history of humankind. It is fascinating to think – in a twisted way, – that most technological and scientific inventions  of the 20th century, including the radar, nuclear bomb, man on the moon, your iPhone and one of their unintended results, climate change, originates from Graz, the birth place of Archduke Franz Ferdinand. 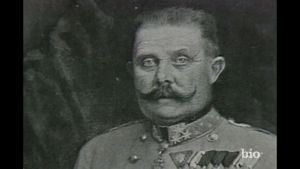 The figure from Graz, whose mere existence probably caused it all. His assassination has altered the trajectory of the world – ( for better or worse…?)  Archduke Franz Ferdinand, another Habsburg member of the “morganatic marriage” club, (a fancy word for you…) Where would you be and what would your life look like if he was not assassinated in Sarajevo…?

A bit of contemporary literature from Graz, Folke von Tegetthoff. (another von…) A story teller, has written over 40 books. He has also written  films and performances. His favorite genre is new style fairy tales for adults. “There is no greater desire than to find someone who listens to you”

http://youtu.be/j1pruq2VffM <—- CLICK HERE!  Ironically, a probably much better known figure  from Graz, is, the ultimate pop culture icon, the total recall governor of  California, 2003, former two times Mr. Universe, Arnold Schwarzenegger.  He was the son of the former police chief of Graz, Gustav Schwarzenegger. His father was also a former Nazi party member during WWII. We all know   Arnold’s rise to fame and his fall.  Arnold’s movies range from “Pumping Iron”  to “The Terminator” and beyond. It can happen only in America and it can happen only in California. 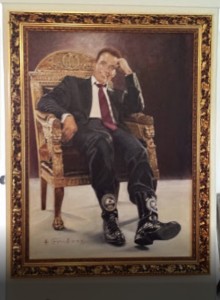 Graz’s legendary son, Arnold Schwarzenegger Mr. Universe, The Terminator, the Total Recall Governor of California. Unlike the two Archdukes, he married up, not down into the American royal family, the Kennedys and he still managed to screw up. Herr Tegelhoff could write a new style fairy tale about him.

By the way, as you would expect, there is an Arnold Schwarzenegger Museum in Graz. It is the sort of Austrian “Graceland” with less flair  and more though guy image.  The museum recreates Schwarzenegger’s early life in Graz, Austria. It exhibits memorabilia, photos, documents, exercise machines and other, sometimes frivolous curiosities. 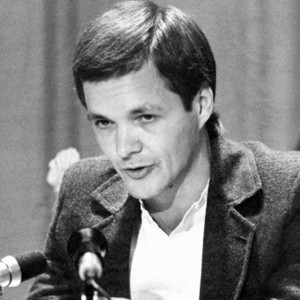 The difference between fame and infamy is just one’s interpretation . Jack Unterweger, the Austrian serial killer has certainly stained the impeccable list of famous sons of Styria. Jack, the son of a Vienese woman, Theresa Unterweger and an unknown American soldier, was born in Judenburg, Styria just an hour drive from Graz.  Jack’s early life was the clear road map to the dark side. He’s been in and out of prison for sexual assault. He committed his first murder in 1974. While in prison he started writing stories and poems. “Purgatory of a Guilty Man” has served as the main source for a documentary movie. In 1990, Unterweger has been released from prison as a rehabilitated man with the assistance of public and celebrity pressure. His writings has been taught in schools and his twisted persona celebrated as the example of one of the successes of liberal penitentiary reform. Jack has become a public figure, journalist and broadcaster. As it turned out, during his broadcasting carrieer, he was reporting many of his unsolved earlier murders. 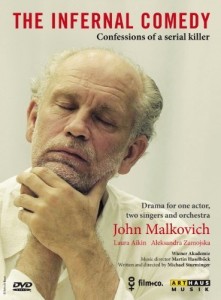 Unterweger has turned out as a notorious “meurtrier sans frontier” (murderer without borders) as it was discovered that he also killed in Czechoslovakia, Germany and later in the US when he was hired  by a magazine to write about crime and prostitution in the US.

Even though he committed suicide in his Austrian prison, his infamy has been carried on in popular culture. He has been portraid by John Malkovich in “Seduction and Despair”, he was also portrayed in “The Infernal Comedy” in 2009 and in a documentary movie, “Entering Hades.”

An Austrian play about the disturbed mind of Unterweger

He was charged of eleven murders and found guilty of nine. Since he was seeking appeal while he died by Austrian law his “guilty verdict was not legally binding.” 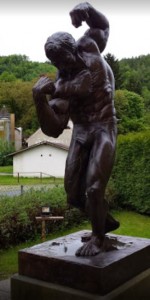 Ha… an outdoor sculpture at the Schwarzenegger museum 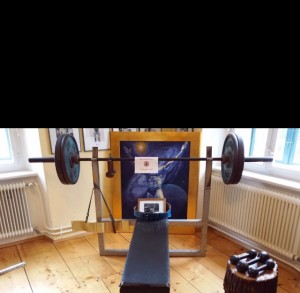 A   priceless  piece  from  the Schwarzenegger  Museum. Could art thieves sue the museum for hernia injury… 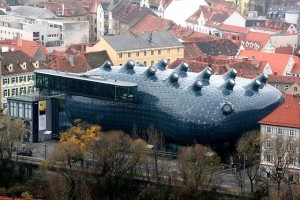 The super futuristic “Kunsthaus” in Graz. It is the home of art works made after 1960. Or perhaps it is a secret  submarine that can be modified to launch missiles to help in the restoration of the Habsburg Monarchy and the elimination of  the prohibition of”morganatic marriages” for members of the imperial family. Who will be the new emperor? Arnold, Johann or Ferdinand? Perhaps Folke von Tegetthoff will reveal it in his next fairy tale book