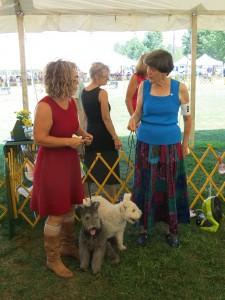 While we are in the middle of the Atlantic Hurricane Season that runs from June until the end of November, the National Oceanic and Atmospheric Administration (NOAA) has thought that they have covered the Atlantic region with a reassuring certainty.

Not so fast folks because today, Hurricane Catskill Battyogo Bikfic, (owners,  Marika and Paul Foreman of Somerville, NJ,) has taken the East Coast by surprise (to keep it modest – I am referring to the event as “by surprise…”) and has won “Best Beginner Puppy in Show” at the Somerset Hills Kennel Club AKC Show in Bridgewater, NJ.

The background of the story: AKC has started organizing more 4-6 months old puppy shows to help breeders and owners to be able to acclimatize their young dogs to show environments earlier. 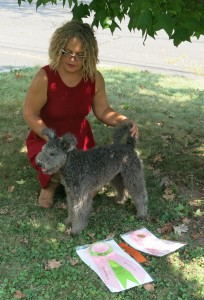 Surprisingly, the AKC has changed its “ancient regime” behavior and has generously decided to  allow puppies of the Miscellaneous Class to participate in the “Best  Beginner Puppy in Show” competition as well.  (A few weeks ago, during the West Springfield, MA AKC shows, organizers were not sure wether miscellaneous pups could participate in the Best in Puppy Show or not, so my cute Catskill Becsi Barsony was excluded from the event.) 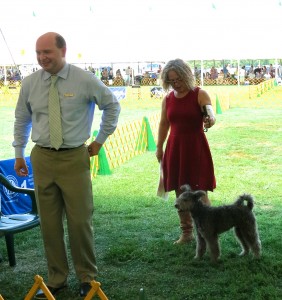 at the end of victory lane…

Although, Catskill Battyogo Bikfic was invited into the ring after his Best in Misc. yesterday, we’ve declined to enter,  based on our last show experience – I thought that the invitation was an administrative mistake…. However, today, the judges were insisting that yes, AKC has given the green light for MIscellaneous puppies to enter too. 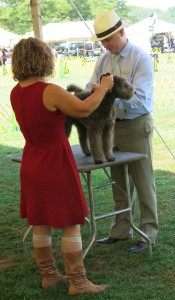 While Bikfic was hesitant on the table a few weeks ago, today he stood there like a pro (we worked out the problem…) 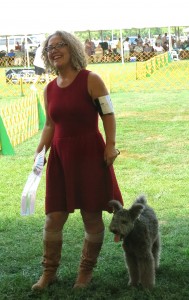 The Little Guy in the Big League… 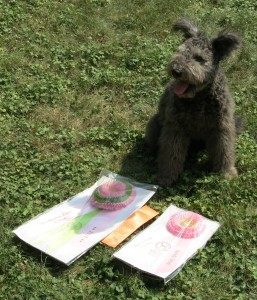 And the winner is… ( BOB, B in Misc, and Best  Beginner Puppy in Show…)