“There is absolutely no necessity to learn how to read: meat smells a mile off, anyway.” Mikhail Bulgakov, “Heart of a Dog.”  Unfortunately, this could easily be a quote from any Caffeinated Beverage Party “Big Dog.”

Ignorance and selfishness are the words of the  past ten days…  The partial government shot down has sent  the country in a temporary chaos.  I guess, a Tempest in a teacup can get out of control after all – so to speak….

Government services stopped, people do not get paid, businesses are distracted and rats are jumping ships to avoid their potential demise, thanks to some mulish tea bags.  This last statement bears some real weight and it can easily happen.  Of course not all mice and rats are equal, so you do not have to worry about the safety of the familiar rodents running in your neighborhood.  But did you know that lab rats and mice in government research facilities and even in private laboratories that are dependent on government funds, face an unavoidable lab rats and mice genocide when research funds stop coming in?  Killing these guys in masses is a standard procedure when research labs face budget cuts either temporary or otherwise during financial distress like the one we are experiencing right now.

While you worry about your government bonds potentially losing value, or perhaps the country defaulting on its debts, dogs worry about less treats and bones coming in their way.

It has been said that large number of dogs heading north since the news came out about the potential fate of laboratory animals.  Based on unofficial reports, almost 1% of the U.S. Pumi population immigrated to Canada within the last week. This is a serious number folks.

The last known case is Catskill Ag Pumi, again from Upstate New York who has flown to  Saskatchewan Canada yesterday,  to live with his new owner, Adam, two Pulis and eight Komondors.  He is the second Pumi from the Catskill Pumi Kennel within ten days, to choose leaving the U.S. and settle in the seemingly friendlier and more sane Canada to appreciate the safety network that almost every civilized country offers to its dogs and citizens. 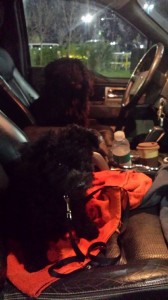 Off the plain and in the truck at the Regina airport in Saskatchevan, Canada. Ag is patiently waiting to start the last lap of his journey to his new home in Neudorf. He is looking forward a fabulous life working on Adam’s farm. (in the background at the wheel is one of Adam’s Pulis).

Before boarding his plane, Ag finished his interview by saying, “I do not know wether getting from Tea Party to Banana Republic is considered a natural progression or not, but you have to be careful with tropical fruits and plants.  Too much Potassium is bad for the heart and kidneys while too much coffein can cause hyper activity and consequently impaired decisions.  Well, I am a carnivore, so I rather stuck with a bone.”

We wish you a happy life Ag and hope to hear from you periodically.