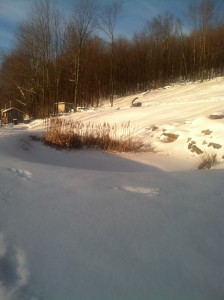 it is bitter cold -9F real temperature at 8AM this morning with a foot of snow.

While winter is beautiful, it is also long and exhausting. We have been dueling with arctic cold spells and significant amount of snow from an undisciplined Polar Vortex (writing this in the toasty warm radiating from the wood stove, “Polar Vortex” sounds more like a record label…) . 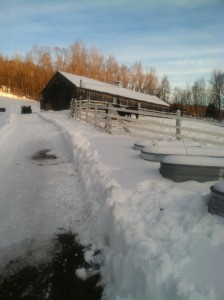 It is only the first week of February so no surprise that “Old Man Winter” has a serious attitude problem and keeps pushing his arctic onslaught on us  with high intensity. However, the good thing is that February is the shortest month of the year so winter’s temper tantrums after all, amounts to no more than a well designed extinction burst before the long awaited spring appears on the horizon.  But right now, it’s awful cold and we’ve been in negative F temperature territories with around a foot of snow on the ground for more than two weeks. 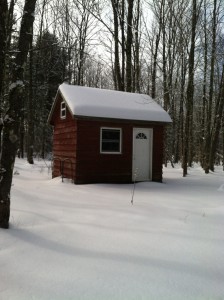 the cabin on the top of the property where we escape from the stress of country life. 🙂 sleeping loft, woodstove and the deepest silence you’ve ever experienced. A great place to get away for Valentine’s Day

While we’ve been struggling with the capricious nature of climate change, life on the farm has to run as business usual. Lambing and kidding  follows its own regular cycle, however, we have to implement  carefully orchestrated safety measures such as heat lamps, heated water buckets, blankets, safe and dry isolation cubicles and frequent visits to the barn in the daytime as well as in the middle of the night to help moms and the new borns this time of the year.

The first two newborns have arrived last night around 9PM with no complications.  Although, the temperature was -9F and it will get colder before it  starts warming  up again, the arrival of new lambs is a clear signal that spring is on its way.