Orb, the 2013 favorite or a creation of news media deprivation for  a “Feel Good Story” of Triple Crown Championship.  He has failed to fulfill hopes and prophecies.

Drama… Drama… Drama… in different dimensions at different places. Multimillion dollar thoroughbred vs. Pumi, an obscure Hungarian herding breed in the U.S. from an upstate NY fiber goat and sheep farm … while the stakes have been obviously strikingly different,  the co-owners of Orb, the Kentucky Derby winner colt, have most likely felt the same emotional disappointment after losing the Preakness yesterday that I have felt today in Budapest.  …we were so close… it was within reach… gosh…almost…

It was a bitter sweet day for us today, a contemporary imperfect Cindarella story…  Kaffogo Agyag has fallen short becoming Junior World Winner in Budapest.  How ironic human nature is…

We’ve been bruised at multiple occasions at AKC conformation shows traveling up and down along the Eastern Seaboard in the U.S  the past six months.  Inexperienced judges, color discrimination, obscure breed, etc.  Excuses are endless and regardless wether they are justified or not,  we have learned to accept  failure as the price for paving the road for the Pumi in the U.S. 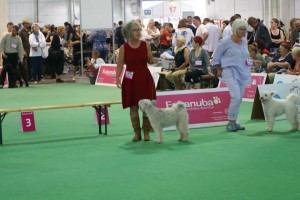 I am pretty exhausted while Agyag is desperately waiting for guidance.

Than on May 13, we traveled back to Hungary, the Mecca of the breed. During the week, leading up to Sunday’s ultimate WORLD DOG SHOW,  Agyag has won every event – not surprisingly. Let’s admit, that in addition to her excellent breeding by Anna Varadi, she is an exceptional character.

At the end we have fallen short. We have come in second in Junior Class at the official WDS 2013.

Why? who knows … the mistake of Lufthansa in Dusseldorf… (the dogs were lost for hours locked up in their crates on the tarmac of the airport we lost our connection)?  Exhaustion…?(she lives on an Upstate NY farm after all with not too much urban stimuly and after the third show,  I have started losing my focus too…)  Her mistimed full blown heat…?

We are gone to Hortobagy for the herding week…

p.s. Thank you Chris Levy to fix up Fruska and Agyag’s grooming.